HELEN KELLER HONORED BY THE QUEENS COMMUNITY SHE CALLED HOME

Under the railroad on Ascan avenue, onlookers watched a tribute built for Helen Keller.

She’s a national icon but as historian, Michael Perlman explains, she’s also a local one.

“She was very active in Forest Hills, every year on her birthday she opened up her home to many forest hills residents,” said Perlman

Keller lived in her Forest Hills home for over 20 years starting in 1917. Family friend, Robert Hof says her neighbors loved her. 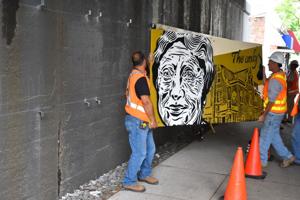 “It was a very lovely tutelage considering her worldwide travels and connections she maintained a very indigenous connection with her community and friends,” said Hof.

Now her legacy is being remembered with a 48-foot mural. It features her former home, her dogs, her words and more. It’s the brainchild of Perlman who secured thousands of dollars to honor her legacy.

“To me, Helen Keller serves as a beacon of light and hope and integration to so many people countless generations,” said Perlman.

The tribute was done in spray paint by international muralists Crisp and Praxis.

“It was meaningful to us to celebrate Helen Keller, not just in Forrest Hills, and not just with the beautiful mural but also to have the painting of the mural take place at the exact spot where she once lived,” said Rabbi Mark Kaiserman of The Reform Temple of Forest Hills.

Her former home caught on fire and was demolished shortly after she moved. The Reform Temple of Forest Hills now sits on that land.

It’s a fitting spot for a house of worship because Keller was deeply devoted to her Christian faith. She even wrote a spiritual autobiography entitled light in my darkness.

“Well Helen Keller was a woman of deep conviction. And in our Synagogue, although Judaism is different than her Christianity, we all believe in the power of God and connection to other people,” said Rabbi Kaiserman.

Now just minutes away from her former home, Keller’s faith, determination, and strength will forever be remembered.