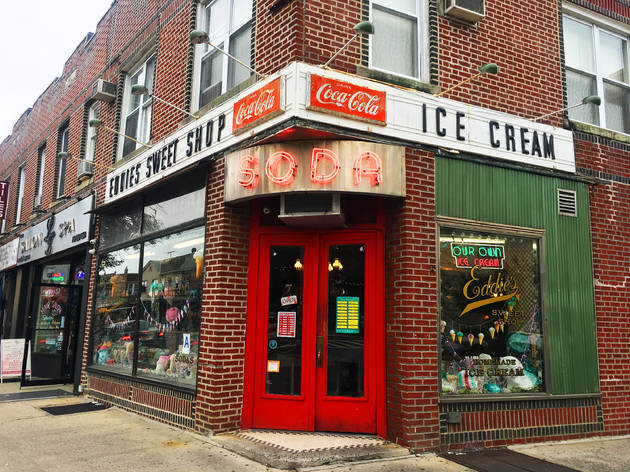 Like Katz’s Deli, Delmonico’s, and Lombardi’s, Eddie’s Sweet Shop on Metropolitan Avenue in Forest Hills is one of New York City’s oldest eateries. It’s also the city’s oldest ice cream shop! Believe it or not, Eddie’s has been scooping homemade ice cream and toppings from behind the same marble countertops since around 1925! (Though other folks might claim otherwise: A publication innacurately reported that it opened in 1909, and the news spread quickly).

After the original Jahn’s franchise locations closed, Eddie’s unofficially became the oldest ice cream shop in New York City, but owner Vito Citrano won’t own up to the superlative and does not advertise it anywhere.

“We just keep doing what we’re doing day by day and don’t think about it,” he said. “We don’t change much, so you always know what you’re gonna get here.”

When you walk into the unassuming corner store, the first thing you might notice is that Eddie’s does not look like the typical retro ice cream parlor. Other soda fountains might have 1950s decor with chrome counters and bright red booths, but Eddie’s wooden and marble interior has not changed since it opened. Even the refrigerator is more than 80 years old.

“When we bought this shop in 1968, it was already nostalgic,” Citrano said.

The Citrano family and their team of scoopers make all 18 flavors of ice cream from scratch, using the same recipes that Giuseppe, Vito’s father, inherited (and perfected) from the shop’s previous owners. The menu doesn’t list any trendy ice cream flavors, so don’t even think about asking.

“We don’t make Rocky Road. You want Rocky Road? Here, I can put nuts and marshmallows in your chocolate ice cream,” he joked. Citrano makes the whipped cream and all of their sauces by hand (not machine) every day, including hot fudge and caramel. But when asked how he makes his toppings taste just like melted candy instead of the usual thin syrup, Citrano remained tight-lipped:

“We can’t just go around sharing all our secrets,” he said. “I can tell you it involves a lot of stirring and a lot of corn syrup. If you’re afraid of corn syrup then this place is not for you.”

The classic ice cream shop is particularly known for its towering classic sundaes with “the works” (hot fudge, homemade whipped cream and a cherry). While chocolate is one of the most popular selections, you can also order flavors like vanilla chip, coffee, maple walnut, vanilla, and vanilla fudge. Citrano also claims that Eddie’s has a secret menu, but he would not say anything further about it: ‘How is it a secret menu if everyone knows about it?

A shop that’s been around for nearly 100 years definitely has its longtime regulars. We even spoke to one customer who has been coming to Eddie’s for 65 years. For Citrano, despite their “old-school” customer service (he likened his father’s gruff, impatient exterior to the original Soup Nazi), they have always valued their customers from day one:

“We had customers that would come in every single day and when we didn’t see them we knew something was wrong,” Citrano recalled. “We still have a few like that and if they didn’t show up, we’d go over and check on them and see if they’re okay.”