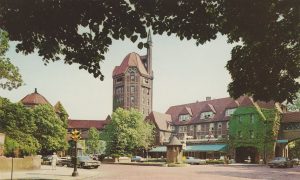 One of the most historic sites in Forest Hills, the Forest Hills Inn at 1 Station Square, is celebrating its history with a new exhibition in its wood-paneled lobby.

The permanent “Inn-sight to Yesterday” display includes restored postcard prints reflecting on its 1912 through its conversion into a residence in 1967, as well as the history of Station Square and its connecting buildings including The Raleigh, The Marlboro, and LIRR station. Also featured in the display are matchbook covers, menus, ads, letters, and an account card.

“When you find old files, you are very surprised,” said George Hoban, president of the board of the Station Square Inn Apartments Corporation, who discovered a treasure trove of memorabilia in an abandoned attic. “When someone would book a hotel room back in the early 1950s, they would get a confirmation by mail, including a self-addressed postcard, where they would place their banking information. “It would be sent back to the Forest Hills Inn, which checked with the bank to establish a line of credit,” he added. “It entitled them to credit at the shops, restaurants, and bars at the hotel Rooms were about $6 a night, dinner was about $3, and lunch was less than $1.”

Station Square once accommodated a classy social life, particularly at the Forest Hills Inn. A full-time staff of nearly 50 employees worked and lived at the Inn, which offered 150 rooms. Over 100 temporary and permanent residents lived there. The NY State Census of June 1915 counted 109 guests and a staff of 44 members. The Green Room accommodated luncheons, bridge and dinner parties, and the Rose Room was the scene of ballroom dancing, afternoon tea, and meetings of the Forest Hills and Kew Gardens Republican Club.

The Windsor Room, the main dining area, now known as Jade Eatery & Lounge, hosted dancing on weekends and dinner music evenings. And the Fountain Room offered a commanding view of the Tea Garden.
An edition of The Forest Hills Bulletin from 1924 read, “The Tea Garden of the Forest Hills Inn is a veritable fairyland when lighted with Japanese lanterns, with the trickling fountain heard in the background and a new moon shining overhead. There is no more delightful place in Greater New York for one to spend the dinner hour.”

The Unicorn Lounge and Bar was a few steps from The Windsor Room, and now serves as the bar area of Jade Eatery & Lounge. Several classic features are preserved, including an ornamentally carved bar and wooden balustrade.

The Terrace Room, which is now a medical office at 5 Station Square, was advertised as a “beautiful setting for your private functions.” A mural in the room gave the illusion of being surrounded by forested cliffs, a horse and carriage, waterfalls, and boats. The lobby led downstairs to an Old English taproom, which was a nightspot where performers ilike Mickey Gloe would entertain on piano. From 1951 to 1953, famed pianist Lou Wertz, better known as Roger Williams, tickled the ivories. Tennis notables were guests, especially during the tennis championships at Forest Hills Stadium. They included Pancho Gonzalez, Jack Kramer, Maureen Connolly, Pancho Segura, and Margaret Osborne duPont.

The Sidewalk Cafe in front of the Forest Hills Inn’s Windsor Room was considered “a summertime institution in Forest Hills.” In the mid-1960s, a “Celebrity Walk” was created by managing director Mark Fleischman, who acquired the Inn along with his father. In front of the Inn were concrete slabs featuring handprints of notables such as Frank Sinatra, Barbra Streisand, Sammy Davis, Jr. and Buddy Hackett. In 1965, a $500,000 renovation created an intimate downstairs area known as Three Swans Pub. A young Barry Manilow and the Sonny Oliver Trio performed there.

The board’s goal is to introduce furnishings that enhanced the period hotel ambiance. “The beauty and consistency of our building is the hub of Forest Hills, and the board’s role is to amplify its beauty and history,” Hoban said. “The furniture and framing were donated by residents Andrew and Renee Mattson, who are eager to share the great history of our building.

We have also added a 1950s television, a 70-year-old slot machine, a grandfather clock, and a Victrola,” he added. “We have been scouring eBay and other avenues to find memorabilia, and we will keep adding it to our lobby as time goes by.”