FOREST HILLS BAGEL SHOP VOTED ONE OF THE BEST IN THE CITY!! WHERE DO YOU GET YOUR FAVORITE BAGEL?? 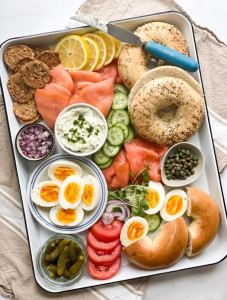 FOREST HILLS, QUEENS — In a city that prides itself on boiling and baking, a bagel shop in Forest Hills just received a new honor: it’s among the best bagel shops citywide, according to a new list.

The 22-bagel shop list, which was published by Eater, ranks boiled and baked (never steamed!) bagels from shops across the city, as judged by the site’s staff.

Forest Hills Bagel, located at 10441 Queens Boulevard, is one of three Queens spots to make the cut, along dozens of other from the Bronx, Manhattan, and Brooklyn. No Staten Island bagel shops are on the list.

Eater describes Forest Hills Bagel as a “comfortable bagel experience,” where the diner-like interior is complemented by an “opulent counter display” including a “large range” of cream cheese and bagels.

The site recommends the cinnamon raisin bagel for sweet bagel lovers, and poppy and sesame bagels for those who want lots of seeds. As for cream cheese, Eater points out that there’s many flavored cream cheeses, alongside a host of “their surrogates,” like low-fat and non-dairy spreads.

This isn’t the first time, however, that Forest Hills was recognized for its array of noteworthy eats. In May, for instance, two neighborhood spots were named on a Michelin-vetted list of New York City’s best spots for cheap eats.