16 NYC Places That Don’t Look Like They’re In New York City…How Many Have You Visited??

These magical spots look like they could be plucked from different cities or even countries, but are actually hidden gems within our five boroughs. 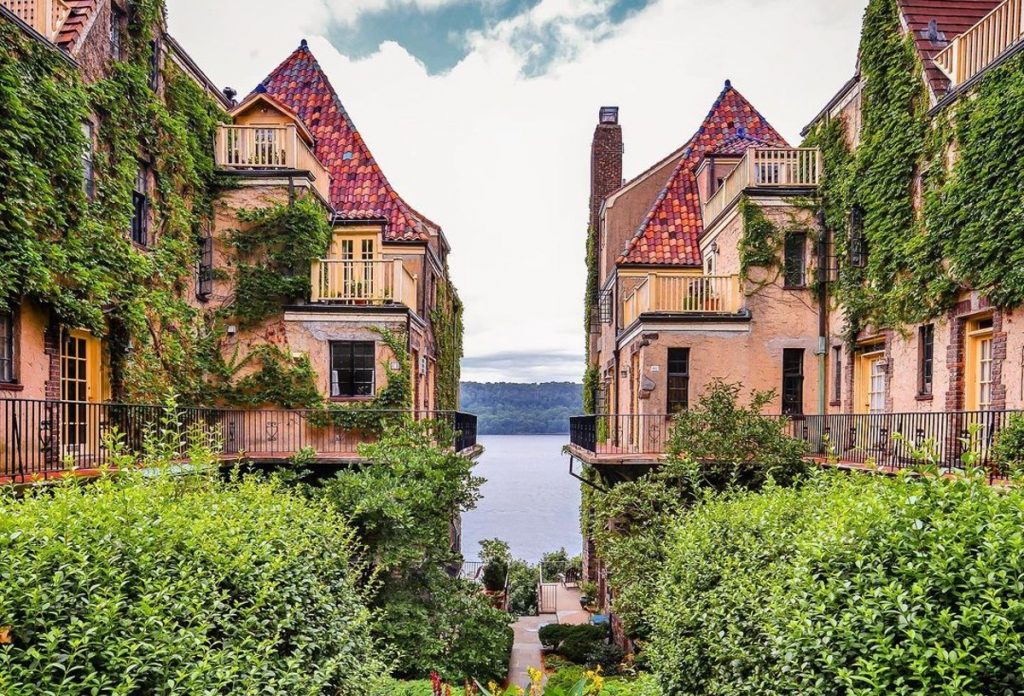 New York City is full of so many incredible features, but most of them are very well-known: the Empire State Building, the Brooklyn Bridge, the Museum of Natural History, etc.

But there are also some extraordinary must-visit locations that you wouldn’t believe are actually in the concrete jungle. From secret parks to historical streets, there is so much to explore right here in NYC.

This isn’t your average “places to visit” list—these 16 spots are actually completely different from anything else in the city, and will make you question if you are even still here!

Here are 16 spots in NYC…that don’t actually look like they’re in New York:

This lovely NYC neighborhood was modeled after an English village back when it was first built in 1910, offering a little piece of the UK in Queens, with quaint Tudor-style houses and a town center with a train station. Read more about it here.

If you didn’t know about The Cloisters before, you might not ever believe that a medieval castle was in the middle of New York City. But it is! The Cloisters is a branch of The Metropolitan Museum of Art that is devoted to European art history. It was designed and constructed taking elements from many different medieval cloisters, which are covered pathways in a church or monastery that connect to form an open square in the center. Find out more here.

Central Park has lots of little-known sections within its sprawling greenery, and one of those is called “The Ravine,” the stream valley section of the North Woods that spans 40 acres at the top of the Park. Here you’ll find a clandestine cove of at least five different waterfalls, all man-made. Park designers Frederick Law Olmsted and Calvert Vaux wanted New Yorkers to feel as if they’d escaped the city for the Catskills or the Adirondacks, even if they couldn’t afford a vacation to those places.

Where: Enter from the West Side through the Glen Span Arch around 102nd Street; Follow the moving water down the dirt pathways in an Eastern direction (called the “Loch Walking Path“)

Italy or the Bronx? The beautiful “Villa Charlotte Bronte” apartments look straight out of Europe. They were built in 1926 and sit along the Palisades, overlooking the Hudson River, in the Spuyten Duyvil neighborhood of The Bronx. The design was actually based on an Italian villa, which definitely makes sense, and includes balconies as well as lush gardens!

You may think of a gondola as a means of sightseeing in a European city, but we have one right here in the form of the Roosevelt Island Tram. Built in 1976, this streetcar offers the most amazing views of NYC, climbing 250 feet above the East River at its peak. It was originally created to serve those living on the island — it is the only aerial commuter tram in the U.S. — but now can be enjoyed by everyone from visitors to other New Yorkers alike.

These massive stone arches looks straight out of another era…and that’s because they are! Built between 1901 and 1905, the “Billings Arcade” is some of the last remains of the Tryon Hall mansion, built by wealthy Chicago industrialist Cornelius K. G. Billings. John D. Rockefeller, Jr. purchased the $2 million estate in 1917, only for it to burn down a few years later. Read more about the history from the Fort Tryon Park Trust.

Makes sense that #2 on our list is right next door!

Where: Riverside Dr. To Broadway (arches are near down toward the Billings Lawn, this website has good detailed directions)

When you’re sitting at the Island Oyster bar on Governors Island on a sunny day, feeling the sea breeze flow from the Hudson River, you will surely forget you are even in the city (except for that gorgeous view of the skyline, of course). You’ll feel like you’re on vacation on a tropical island—and you only had to take a $2 ferry from downtown Manhattan.

Hours: Closed for the season, will reopen in May

This hidden little park in Midtown East is only 1/7 of an acre, but it definitely packs a punch. It holds a 25-foot waterfall that is not only a sight for sore eyes in the middle of Manhattan, and will also distract from the noise of the busy streets. It was built in 1971 by the Greenacre Foundation from a design by Hideo Sasaki.

The Andrew Carnegie Mansion is a historical spot now home to the Cooper Hewitt Smithsonian Design Museum. The mansion was originally completed in 1902 and reached landmark status in 1974, though it has undergone much change over the years. The grounds of the mansion, and now museum, feature an expansive garden and cafe for visitors to enjoy as well as a little opulent oasis in the middle of Manhattan.

The Morgan Library feels like a trip to a library from Harry Potter or old world Europe. The historical venue was built as a private library between 1902 and 1906 for financier Pierpont Morgan. He began collecting manuscripts and other historical materials as early as 1890, and now they line the walls of the museum. You can find some of the country’s rarest music manuscripts, early children’s books, Americana, early printed books and more there. Purchase tickets here.

NYC’s own “Little Paris” is the work of one group of French business owners determined to showcase NYC’s own enclave of French culture on Centre Street in Nolita/SoHo (between Broome & Grand St.). Along Centre St. you can find French café and bakery Maman, wine bar La Compagnie des Vins Surnaturels, and art and home decor shop Clic. To complete the Parisian vibe is the old police headquarters located across the street from Coucou French Classes, whose architecture was inspired by Paris’s famous Hotel de Ville (City Hall) with its Beaux Arts style. Read more about it here.

The Van Cortlandt House is the oldest surviving building in The Bronx, and was built by Frederick Van Cortlandt (1699 – 1749) in 1748. The Van Cortlandts were a prominent merchant family who owned a plantation on the property. ​Generations of the family lived there for 140 years, and in 1887 it was sold to the City of New York and made into public park land (Van Cortlandt Park itself it also the third largest park in NYC and has lots of unique hiking trails and vantage points!). Before it was a museum it had many random, unique uses like a temporary police precinct and a living space for ranch hands that cared for a herd of buffalo on the property.

Stone Street is one of the rare cobblestone streets in NYC, that gives more of an old school European feel to the starkly modern city buildings around it. According to Untapped Cities, the street was one of the first to be paved with cobblestones (in 1658) in the Nieuw Amsterdam colony, which is where it got its name. Today, no cars are allowed through and in the warm weather because of outdoor seating, it’s one of the few NYC locations where drinking is actually allowed in the streets.

Where: From Whitehall St. to Broad St., between Marketfield St. and Bridge St.

Tucked all the way at the end of 42nd Street (between 2nd Ave. and the United Nations Plaza), the Ford Foundation Center for Social Justice is a true hidden treasure of New York City. With sunlight streaming in on multiple sides, the 160-foot tall atrium holds 39 species of plants. There is also a reflecting pool, and a sensory garden with plant life you are encouraged to touch and smell. Read more here.

Hours: Temporarily closed due to COVID-19

If you’re looking to be surrounded by nature instead of the concrete jungle, the Jamaica Bay Wildlife Refuge is the place for you. On over 9,155 serene acres you can hike, go bird-watching, explore turtle nesting and admire the wide variety of wildflowers, moths and butterflies.

This lush oasis in the heart of Brooklyn will make you feel like you’ve been completely transported to another city. During the cherry blossom bloom in the spring, it will surely feel like a trip to Japan, but year-round it provides a natural haven for New Yorkers with varying blooms all over its very walkable grounds. Purchase tickets on their website here.