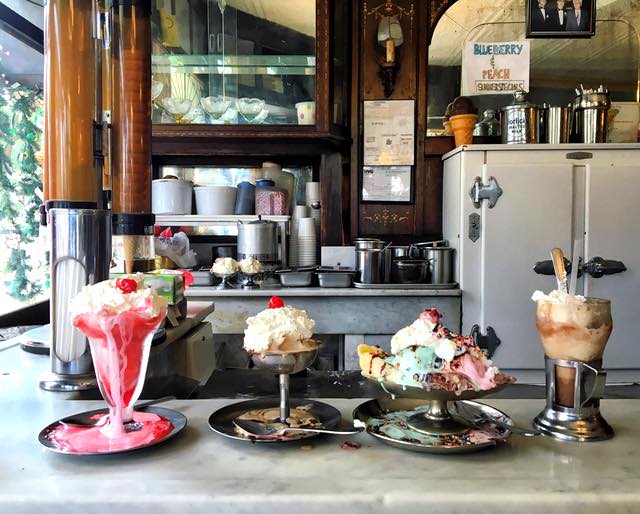 Critics at Eater NY and Forest Hills locals went searching for the best ice cream shop. Both came back with the same answer in Forest Hills.

Both came to the same conclusion: Eddie’s Sweet Shop, a beloved ice cream parlor that’s been at 105-29 Metropolitan Avenue since the 1960s, is the best bet for a frozen treat in Forest Hills — and, arguably, the city at large.

Eater described the parlor, which makes all of its own ice cream, simply: This “Queens stalwart serves up towering ice cream sundaes and cones stuffed with a range of scoop flavors including coffee, maple walnut, and pistachio. Cash only.”

“Eddie’s is awesome. The ice cream is made in-house, which means it stands head and shoulders above commercial ice creams in terms of both quality and variety,” wrote one neighbor, endorsing Eddie’s as the best ice cream spot in Forest Hills.

“The handmade sundaes are in a league by themselves. It is worth a trip to the Queens section of New York City to sit and have ice cream with your kids, perhaps after taking in a movie at the nearby theater. It is an old-New York ice cream experience you may never have again.”

Over half of the 39 commenters who responded to the Facebook post inquiring about the best ice cream in Forest Hills said Eddie’s.

The parlor, though, is used to accolades: It has topped lists of the best ice cream parlors in the world, and been singled out as a New York City institution.

Last year, the ice cream parlor made headlines for something other than its sweet treats.

In September, it went take out only after the city began enforcing its vaccine mandate, sparking debates among locals, Patch reported. Six months later, after the city rolled back the mandate, Eddie’s reopened fully once again.

“Thank you for your patience and your support by enjoying our ice cream no matter if it was to go only,” the parlor said at the time. “We look forward to serving you at your favorite table, booth, or stool.”