The area was founded in the early 1900’s by two real estate developers who dreamed of establishing an affluent community with an English style in the countryside not far from the city. They purchased 500 acres of forestland just outside of Manhattan and created an exclusive residential suburb while at the same time preserving the natural charm and beauty of the area. Known as the Jamaica Estates Company, their concept was for residents to enjoy the benefits of living in a park like setting with all the conveniences and easy access to the city.

Building requirements were strict, only one family, two stories with attic, detached homes could be built on a minimum of two lots. The general style of architecture was English Tudor and the streets took on the names of an English village, among them Avon, Kent, Tudor, Chelsea, and Aberdeen. An Elizabethan style stone lodge with giant pillars and gates greeted visitors as they entered the community at Midland Parkway. Today the gatehouse remains and houses the Jamaica Estates War Memorial. They even built a golf course alongside the community, which later became the campus of St. John’s University.

The area has historically been home to politicians, dignitaries, and diplomats among other affluent people. Real estate developer and TV personality, Donald Trump grew up in a stately mansion on Midland Parkway.

Today the Jamaica Estates Association keeps a vigilant eye on the community, maintaining building codes and preserving the unique ambiance of the neighborhood. There’s a style of home to suit almost every taste. Amid the hundred year old Tudors are many diverse style homes including Georgian mansions, colonial, modern ranch and split-level houses. More recently, new constructions have been built on the larger property lots. Residents take pride in maintaining their beautiful lawns and flowering shrubs and trees. In the spring the neighborhood flourishes with beautiful flowers and luscious green lawns. It is a great place to live!

Besides being a beautiful place to live, Jamaica Estates is a wonderful place to raise a family. It’s a small community where neighbors know one another. Situated in the highly regarded public school district 26 there are several choices for both public and private education.

Jamaica Estates is a popular destination also because of the diversity of religious institutions in the neighborhood, including Synagogues, Catholic and Orthodox churches and Mosques.

Things To Do in Jamaica Estates 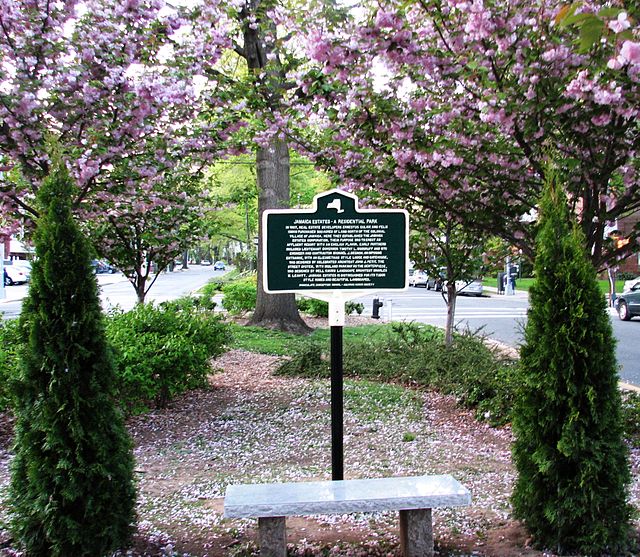 Bordering Jamaica Estates is Cunningham Park with its beautiful nature trails, tennis courts, ball fields and playgrounds. The park plays host to numerous free concerts and movies during the summer. Every spring Big Apple Circus makes Cunningham Park their home for two weeks. This is one of the best public events in Queens and highly recommended for families. St. Johns University has sporting events, summer concerts and a soccer camp for children.

Jamaica Estates is conveniently located between Manhattan and Long Island with easy access to highways and public transportation. The Grand Central Parkway, Clearview Expressway and Long Island Expressway are nearby. The neighborhood is also very close to LaGuardia and JFK airports. The terminal of the F subway line into Manhattan is on Hillside Ave and 179th Street. And the express bus line into Manhattan runs along Union Turnpike.

The Jamaica Estates Association keeps a tight watch on the safety of the community and runs a security patrol funded by members of the association. All homeowners are encouraged to pay the annual dues to ensure the continuance of the patrol.

The information set forth on this site is based upon information which we consider reliable, but because it has been supplied by third parties to our franchisees (who in turn supplied it to us) , we cannot represent that it is accurate or complete, and it should not be relied upon as such. The offerings are subject to errors, omissions, changes, including price, or withdrawal without notice. All dimensions are approximate and have not been verified by the selling party and cannot be verified by Terrace Sotheby's International Realty. It is recommended that you hire a professional in the business of determining dimensions, such as an appraiser, architect or civil engineer, to determine such information.


The information set forth on this site is based upon information which we consider reliable. However, it is recommended that you consult a professional appraiser, architect or civil engineer to determine if such information is accurate. Prices and availability are subject to change without notice.